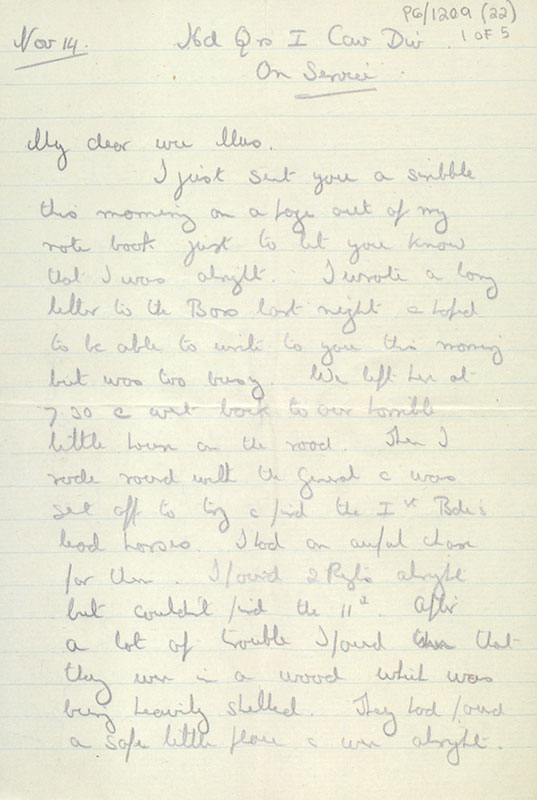 I just sent you a scribble this morning on a page out of my note book just to let you know that I was alright. I wrote a long letter to the Boss last night & hoped to be able to write to you this morning but was too busy. We left here at 7.30 & went back to our horrible little house on the road. Then I rode round with the General & was sent off to try & find the 1st Bde’s lead horses. I had an awful chase for them. I found 2 Rgts alright but couldn’t find the 2nd. After a lot of trouble I found that they were in a wood which was being heavily shelled. They had found a safe little place & were alright. I didn’t get back till after 1 o’c. This afternoon there wasn’t much doing so I went off & tried to find the Regt but they had moved off. It was awfully annoying.

I have just got back here now & got a long letter also the bag which is simply splendid thank you most awfully for it dear wee Mus. It is just what I wanted. It is very strong & will stand the work. I got a French thing which is no good as it was only made of brown paper. It’s an awful nuisance having all one’s kit in one’s bedding. Now I’ll be made up as that bag will hold a tremendous lot of stuff & will weigh practically nothing, not that the weight makes much difference now; but the great thing is to have one’s luggage compact. Then it will pack easily on a car or anything like that. You know I am lucky the way I live. Here I am in a nice chateau sharing a room with Mouse. Quite a nice little room with electric light. When I have finished this I’ll change out of my dusty clothes put on some slacks & will feel absolutely the business. Wonderful luxury you know, when you think of all those poor devils in the trenches half full of water.

It has been bitterly cold again to-day & we’ve had a lot of rain. My feet got absolutely frozen, they have been like ice all to-day. The Boss is going to send me out a pair of Norwegian boots which ought to be good value. You can’t imagine the mud & slush of this country. You see it’s all very low & flat & once the water falls it lies there in great pools. The roads are perfectly dreadful. A small bit in the middle which is paved is alright (made of big blocks of stone) but then there is a sort of ledge worn at the edge of the pave’ & the side is like a ploughed pitch. Over a foot of mud in places.Yesterday morning we went out to our horrible little estaminet again. On the way out Nutmeg didn’t like passing a dead horse. She has a way of whipping round but it’s just tricks well I hit her & made her jump about & she slipped in the pave’ & fell over into the mud. Luckily I struck a goodish place but I got well plastered with mud all the same. It rained hard nearly all yesterday & was bitterly cold. The wind is so awfully cold. It was quite nice in the shade but bitter in the wind.

The Rgt was quite close yesterday so I went round to see them. I was awfully sorry to hear that poor little Willie Cadogan had been killed. They have had pretty heavy casualties. Rotten isn’t it. Rose & Turnor, as you know have been killed. The Colonel, Charles Crichton, Clem, Gibbs, Fielden, Billy Palmes, have all been wounded. Clem is the only one that is bad I believe. I saw old Basil yesterday, it was awfully nice seeing him again. His accident hadn’t altered him much really: Makes his face look a bit one sided. Parker is looking awfully well & was very cheery. They have had a pretty hard time poor brutes. I feel an awful brute leading this easy life when they have to go in the trenches but if I didn’t do it somebody else would. So I must think myself confoundedly lucky. I saw little Frankie, who is looking extraordinarily well. I like that boy better every time I see him. I didn’t see Maurice but hear he is quite fit. He is in command of B. Sqdr & is rather worried over it. It’s a big responsibility of course. Like everybody else they are heartily sick of this war. I really don’t know how men are going to stand it when it gets really cold. It’s bad enough now but in another month it will be 10 times as bad.

We heard from a German prisoner last week that the Germans realised that they were beaten but were going on fighting so as to get better terms of peace. But they’re not nearly crushed yet. All this business of them gaining ground the way they are doing will have to stop. In fact we’ll have to give them a good knock on this side before we can hope for peace. We hear that the Austrians are practically surrounded & will have to stand & fight a last battle or capitulate. Good news if it’s true. Then the Russians will be able to concentrate their whole attention on Germany. If they give her a really good knock over there it will hurry things up a bit. But I think we’ll have to get her back out of France before we can have peace & how long that will take is hard to say. But it’s dreadful to think of the suffering to both sides. Some of the II Bde trenches are within about 60 yds of the Germans in a wood & Grace told me this morning that they could hear the German officers cursing their men to make them go on. They have the most wonderful discipline and are as brave as lions. The whole of the place round here is blocked with French troops & transport it’s almost impossible to get about. Mouse has just come in, he’s been trying to negotiate it & has just come in mud up to his knees.

I got some more chocolate to-night from the Duchess. No letter. I dare say I will hear from Blanchie to-morrow. Awfully nice of her to send it isn’t it. I got a parcel of post cards & presents & a letter from wee Tom when we were in the Chateau at Ploegsteert also a letter. I also got the underclothes, Peggy’s leg & chocolate at the same time. They all arrived the day we were shelled out of the chateau. I’m awfully sorry if I didn’t write & let you know. But things were rather warm that day & I hadn’t much time to write letters. I got the beef tablets a long time ago they were awfully good on the trek up here. I’m eating so much nowadays that I’m getting quite fat. I do a good deal of riding about & then come in & sit about a lot but I’m always ready for my meals. I am always hungry when I come in but I must say I am feeling awfully fit. I am going to wear your little woolly under my kit & it will be grand & warm then I can wear another waistcoat over it. My feet are the chief trouble they get dreadfully cold. The Boss’s Norwegian boots ought to be good value. I hope you could get me some galoshes alright they’ll be good value.

You said in your letter which I got last night that you were enclosing a letter of Emmy’s about these d—d fellows in Ireland but you forgot to send it. What brutes they are. Basil was telling me about his lot yesterday he says that they are behaving awfully badly. Brutes aren’t they. I hear K’s army is doing well, I wish we had some of ‘em out here now to relieve the prisoners a bit. Dinner will be ready in a few minutes & I’ve no more to tell you. Best love to you all dear wee Mus.

P.S. I’m enclosing a cheque for £20 for you. I want you all to amuse yourselves with it.

Nov 15. All quiet to-day. Awfully cold was snowing this morning raining hard too