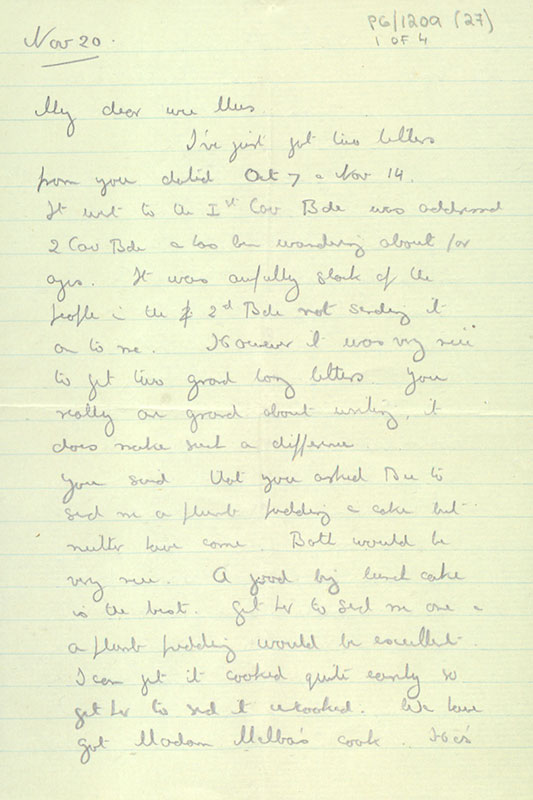 “The poor old 9th have had a rotten time”

I’ve just got two letters from you dated Oct 7 & Nov 14. It went to the 1st Cav Bde was addressed 2 Cav Bde & has been wandering about for ages. It was awfully slack of the people in the 2d Bde not sending it on to me. However it was very nice to get two grand long letters. You really are grand about writing, it does make such a difference. You said that you asked Bee to send me a plumb pudding & cake but neither have come. Both would be very nice. A good big lunch cake is the best. Get her to send me one & a plumb pudding would be excellent. I can get it cooked quite easily so get her to send it uncooked. We have got Madam Melba’s cook. He’s some cook I can tell you. We live the best. I’m beginning to get quite fat. I get through a lot of work in the day & am awfully fit.

I am glad to hear that Nevy is alright. It’s horrid for him being a prisoner but I expect they treat him pretty well. One of the gunners who was in a town in Le Gheer (that was where we first went down to the Lys & were living in the Chateau at Ploegsteert) doing observation post was captured by the Germans. They looked after him very well & when our guns started to shell the house he was in they put him into a cellar. Our Infantry made a counter attack & took the town & the people who were guarding him were captured. That looks as if they treated prisoners well doesn’t it. I’m worried about little Roger & hope he will turn up alright after the war. Frank Crossley & Norman in the 9th were left wounded in Messines when the town was taken. So they are prisoners too. The doctor was with them which is lucky for them as he’ll be able to look after them. Lenny Harvey in the 9th was lost that same night & no trace can be found of him. So I expect he is a prisoner too.

I am afraid you are working too hard with those old Belgian refugees. Don’t go & overwork yourself will you. It has been bitterly cold here to-day. It snowed hard yesterday & then froze. But it was rather glorious this morning & lovely hot sun. I think it’s freezing now, it’s very cold even down here with a fire. I was so cold writing to you last night that I’ve come down here tonight. My chilblains are the devil and are worrying me tonight. Could you get me a pair of snow boots, they might keep my feet warm. They have got rubber soles like galoshes & then sort of cloth tops & fasten in front with a clip. I’ll put a couple of pairs of socks under them & they may keep my feet warm. I think size 8 will fit me, as I don’t want to wear them over shoes. I should think you could get them at Viking’s. Will you send them as soon as you can as I’m having a rotten time with my feet. Will you also send me a box of caramels & a couple of packets of Bournville chocolate. It is in little red packets & each piece is rolled up by itself in a little piece of paper. It’s much better than slabs of chocolate.

We haven’t done much to-day. I went out for a ride with the General this morning, I rode “Lady B” & had frost nails put in. I had to jump a small drain & she over reached rather badly with one of these d—d spikes. Nuisance isn’t it. She’s been awfully unlucky since I got her. I hope her luck may change now. I then went back & went out again on Diana but never caught the Gen. I went into 2 Bde Hd Qrs & saw old Geoff. He took a photo of me. I’ll get him to give me one & send it to you if it’s any good. On the way back Diana was very excited & put her fore legs into a train & took a real good toss but it was into a ploughed field & lots of snow about so it was nice soft falling.

This afternoon I packed up my films & sent them off. I have registered them again so hope that they will arrive alright. Will you send me out copies of them all as soon as you can. I took a whole roll this morning & sent it off. I’m rather anxious to know how they come out. I went for a ride on Melody & posted them. The letter will be slower than usual I’m afraid as it didn’t go the way I usually send it. I went for a bit of a run to-night to get my feet warm. It is awfully cold & freezing hard. I heard last night that poor old
Bob Drake has been killed. Rotten isn’t it. He was one of the best. I used to go about with him a lot in Africa & like him most awfully. Ralph Peto has been killed too. He’s not a proper soldier but came out with his brother who is in the Regt. Buz has been wounded again in the thigh. Rather bad I believe, but I haven’t heard much about it. Bad luck isn’t it as he has been doing awfully well. The poor old 9th have had a rotten time. There are only 3 of them now who came out at the start who haven’t been wounded. They have had 32 officers wounded I think. Dreadful isn’t it.

No more news about leave. I’m afraid it’s doubtful. I’ll stop now & write to the Boss. I quite understand what you meant in your letter. I’ll also write to Mr Parry & enclose both letters in this. Best love to you all dear wee Mus.