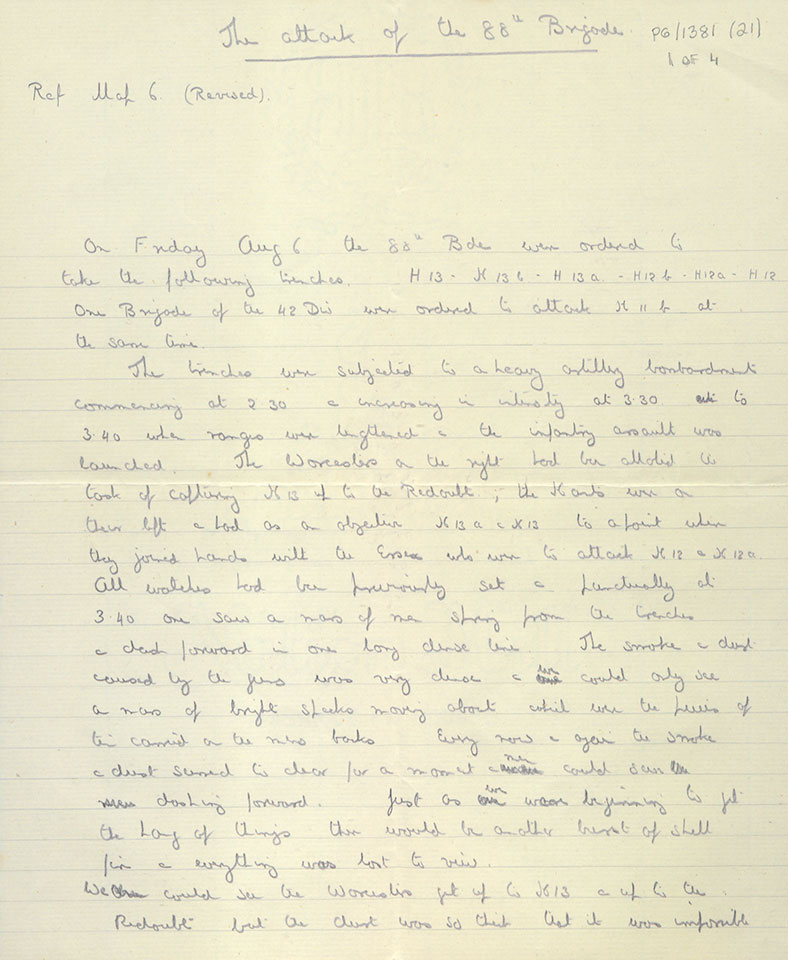 The Attack of the 88th Brigade

The trenches were subjected to a heavy artillery bombardment commencing at 2.30 & unceasing in intensity at 3.30 to 3.40 when ranges were tightened & the infantry assault was launched. The Worcesters on the right had been allotted the task of capturing H13 up to the Redoubt, the Hants was on their left & had as an objective H13a & H13 to appoint where they joined hands with the Essex who were to attack H12 & H12a. All watches had been previously set & punctually at 3.40 one saw a mass of men spring from the trenches & dash forward in one long dense line. The smoke & dust caused by the guns was very dense & we could only see a mass of bright specks moving about which were the pieces of tin carried on the men’s backs. Every now & again the smoke & dust seemed to clear for a moment & men could [be] seen dashing forward. Just as we were beginning to get the hang of things there would be another burst of shell fire & everything was lost to view.

We could see the Worcesters get up to H13 & up to the Redoubt but the dust was so thick that it was impossible to make out if they got into it or were held up. At one moment we saw the whole line advancing & the next moment the dust cleared & there wasn’t a soul to be seen except a few dead & wounded men who were lying out between the trenches.
We then looked expectantly to see the tin discs thrown over the back of the parapets to indicate that our men were in them & later one expected to see yellow flags displayed on the captured trenches, these were to indicate that the trenches had been consolidated. We waited patiently for one hour feeling buoyed up at the great success which had been gained & wondering why there were no tins or flags displayed. At the end of two hours we were a bit weary & wondered what had happened.

All the telephone wires had been cut by the Turkish shells at the commencement of the operation & so communication except by orderly was quite impossible. When eventually a message did come through it was very vague & extremely disappointing.
The Worcesters had got into H12 but apparently had Turks on their right & left. The 6th Manchesters of the 42 Div had taken H11b but had been bombed out again thus leaving the Worcesters’ flank en l’air. Little was known of the Hants but some of them were believed to be in H13 & H13a, they had suffered heavily going forward & it was impossible to ascertain where their flanks were. The Essex had had a similar fate. Having gallantly taken H12a & the trench parallel to it & south of H12 they were subjected to such heavy enfilade fire from both rifles & machine guns that it was quite impossible for them to consolidate the captured ground. After suffering extremely heavy casualties they had to withdraw & only held a small portion of the enemy’s trench east of our southern barricade.

An attack by the 86 Bde was ordered to take place at 10.30 but owing to the uncertainty as to the exact positions of the Hants & Worcesters the attack was put off & officers’ patrols were sent out to find out if we held any portions of the Turkish trenches or not. The patrols were fired on all along the line and the only gain we had made was a small portion of H12a. The Essex Regt were bombed out of this during the night some Turks actually coming into our trenches through the southern barricade, they were all either killed or taken prisoners. Our total casualties were 1851 killed & wounded & 54 officers.

In spite of the fact that this extremely gallant attack gained us no ground owing to our troops being met in the trenches by superior Turkish forces & most of them perished while bravely fighting for their country; it did what was required & held the Turks to their trenches preventing them sending reinforcements to Anzac when a landing was being made that same evening.
It did more than actually hold the Turks in their trenches for that night a large reinforcement was sent down, having the desired effect of wakening the forces opposed to our landing operations.

On the following morning the remnants of the 88th Bde were relieved & brought down to Gully Beach to rest & reorganise. This attack was a wonderful display of dash & bravery & goes further to show what the British soldier is willing to do in the face of superior numbers.