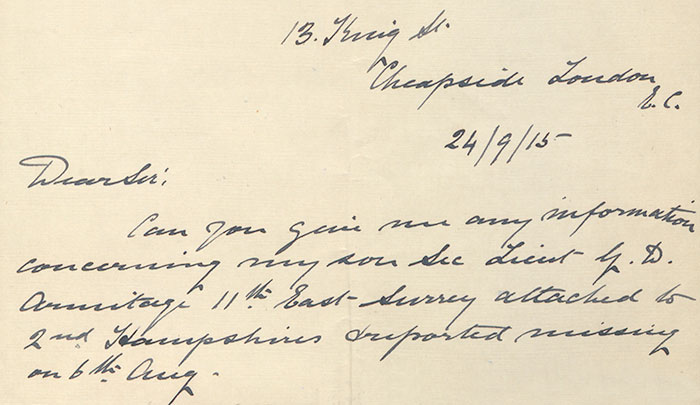 Description: Letter from Edward Herbert Armitage seeking information about his missing son. At the bottom of the letter Pat Armstrong has written “No news of the boy atall. I found a man in that Rgt who saw him fall but I can get no more news of him. Dreadful for the poor father isn’t it.”
Date: 24 September 1914
Source: Armstrong Collection
Identifier: P6/1210 (202)

Can you give me any information concerning my son Sec Lieut G. D. Armitage 11th East Surrey attached to 2nd Hampshires reported missing on 6th Aug. I have been told to-day by Private Paffey of the 2nd Hants now in St Thomas’s Hospital that my son was wounded on that day, taken down to the Dressing Station on the beach, and afterwards placed on a Transport Ship wh: he believes – though he cannot say for certain – was Z.24. I have learnt not to place too much reliance on the statements of wounded men home from the front but in my anxiety to obtain news of my son I do not wish to leave any stone unturned or disregard anything that is told me. My son was one of 16 Officers reported missing on 6th Aug & I have been told by others that there is very little hope.