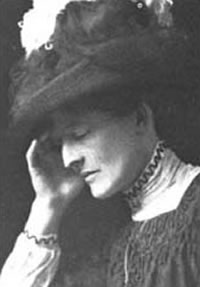 Magdalene Stuart Pember Reeves née Robinson (1865-1953), known as Maud Pember Reeves, was an Australian-born feminist and writer passionately involved in socialism and the suffragette movement; she was married to the journalist, politician and socialist reformer William Pember Reeves (1857-1932). On 12 May 1916, Maud Pember Reeves gave a lecture at Adyar entitled “The Future of the Child”. It was the first of four lectures in a series entitled “Nation Building – Some After-War Problems”.